"Through some fissure the smoke of satan entered into the temple of God." - Pope Paul VI, June 29, 1972 ON THE OCCASION OF HIS NINTH ANNIVERSARY OF HIS CORONATION

PLASTIC SURGERY
"My child, I bring to you a sad truth, one that must be made known to mankind .... Our dear beloved Vicar, Pope Paul VI, he suffers much at the hands of those he trusts....
"He is not able to do his mission. They have laid him low, My child. He is ill, he is very ill. Now there is one who is ruling in his place, an impostor, created from the minds of the agents of satan. Plastic surgery, My child--the best of surgeons were used to create this impostor.
"Shout from the rooftops! He must be exposed and removed. Behind him, My child, there are three who have given themselves to satan. You do not receive the truth in your country and the world. Your Vicar is a prisoner....
"Casaroli, you shall condemn your soul to hell! Giovanni Benelli, what road have you taken? You are on the road to hell and damnation! Villot, leader of evil, take yourself from among those traitors; you are not unknown to the Eternal Father."
- Our Lady, September 27, 1975

DECEPTION OF THE CENTURY
"They have, I repeat, brought forth an impostor, while they have laid low Pope Paul VI, your true Father*. It is the deception of the century!"
- Our Lady, October 2, 1975 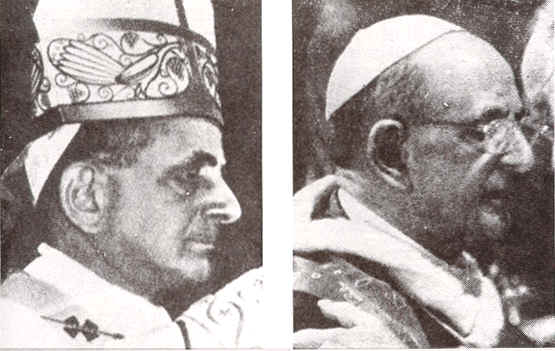 PROFESSIONAL ACTOR
"The impostor, My child, that I spoke of with you, he is a professional man of the acting trade. He has done his job well."
- Our Lady, December 6, 1975

POISON
"The appearance in public is not Paul VI; it is the impostor pope. Medication of evil has dulled the brain of the true pope, Pope Paul VI. They send into his veins poison to dull his reasoning and paralyze his legs. What evil creature have you opened the doors to the Eternal City and admitted?"
- Our Lady, September 27, 1975

TO DISCREDIT
"This impostor, who has been given the image of the Pope, Our Vicar Paul VI, will pose and assume a role of compromise to the world. It is the plan of the evil ones about him ... to discredit your Vicar by placing him in print and photographs in a compromising position to destroy him."
- Our Lady, April 10, 1976

IMPERSONATES
"Yes, it is a fact and a truth that there is another who impersonates him and goes about having photographs taken. And there is a voice that comes out upon your air waves, a very good imitation of your Holy Father. It is all the master deception created by the evil forces that are seeking to destroy your Faith, My child."
- Our Lady, March 18, 1977

COMMON KNOWLEDGE
"It is common knowledge now in the city of Rome that there is one who has been impersonating your Vicar, an actor of great talent, one who through surgery has gained the countenance of your Vicar. It is now common knowledge, My children...."
- Our Lady, August 14, 1976

MUCH COURAGE
"We have chosen to give this message through you, My child and My children in the United States, for We find that there is much courage in the hearts of your countrymen."
- Our Lady, October 2, 1975

REMOVED
"And as a holy Pope once told you before he died, he knew that the smoke of satan had entered into Rome and the Vatican. Well did he understand My visit to him, My child. The world has never known how close I was to your Vicar at that time, Pope Paul VI. Yes, My child, he was removed from the earth, also, with his impostor."
- Our Lady, September 14, 1985

CUT OFF
"In the city of Rome there will be great confusion and trial. Satan, Lucifer in human form, entered into Rome in the year 1972. He cut off the rule, the role of the Holy Father, Pope Paul VI."
- Our Lady, September 7, 1978

TAKEOVER
"In 1975 a message of truth was given to mankind of the great length the evil ones will go to capture the Seat of Peter.
"There is working throughout your world a group We have called 'the octopus,' a web of evil consisting of principalities, powers, all seeking to destroy Christianity and to bring your country and all of the nations of the world under the rule of one-world religionists. It will be a political machine to enslave the world."
- Jesus, June 18, 1978

Note the prominent birthmark between the eye and ear of the true Pope (on the left, 1973 photo) and conspicuously absent on the impostor (right, 1977 photo). Notice the visible difference in the nose. Pope Paul has a longer, straighter, more pointed nose. The impostor has a shorter and rounder nose.

Our Lady stated that the best of plastic surgeons were used to create this impostor. The more one examines the photo comparisons above, the clearly it becomes that these are two distinct persons.

Photos are only one type of physical evidence to distinguish identity. Other physical evidence includes fingerprints, voice-prints, medical findings, etc. In his Umsturz im Vatikan? (An Overthrow in the Vatican?), Kolberg presents further evidence for the existence of the impostor pope. Voice recordings of the Latin "Urbi et Urbi" speech of "the Pope" were made on two different occasions. The two recordings were passed through a voice-frequency analyzer made by Kay Elemetrics of Pine Brook, New Jersey. The output Type B/65 sonagram voice prints of the same words pronounced by the "the Pope" on two occasions shows that they were made by two different men.

Next Directive:  #51 - Cure and Conversion